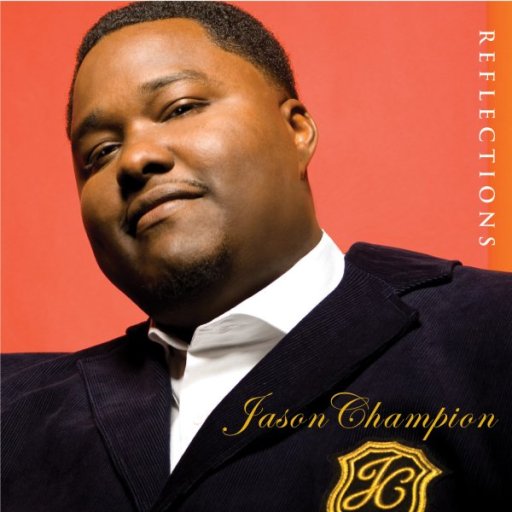 Life for Jason Champion is no coincidence; The Cleveland, Ohio native, husband and father of two sons has spent over a decade honoring his faith and commitment in God to illuminate his path. While the journey has included many stumbling blocks along the way, he has continued to persevere.  Utilizing his natural gift of song, Champ, as he is ironically called, prepares for a glorious victory with his inspirational debut on Brooks Entertainment Group/ EMI Gospel entitled Reflections.

With Reflections, Champion’s desire is to touch souls the way God has touched his life.  “I hope that this message and music will affect someone, some way, some how.  The title track, co-written and produced by Gerald Haddon, Champion’s former roommate and brother to gospel great Deitrick Haddon, is a personal testimony for Jason Champion.

Music was present in the Champion household, primarily from Jason’s father, an elder in the church.  By the 11th grade a brief encounter with Gerald Levert led to an audition, Jason and David became the R&B group Men At Large barely out of high school. Their self titled debut album and their sophomore recording, One Size Fits All catapulted the young adults to the stratosphere singing. In 1996, a still small voice spoke to Champion. “God informed me gently through his Holy Spirit that I needed to do other things and break away from Men At Large.”  Coincidently, David desired to go solo and the record label wished to sever ties.  This was Champion’s confirmation that God was in his midst and he was to exercise his obedience.

A chance reintroduction with Kirk Franklin, with whom he had been acquainted during his Men At Large days, led to Champion’s contribution on Franklin’s Hero album and tour, beginning in March 2005.  While on tour with Mary Mary, Champion became acquainted with Erica Campbell’s husband, famed producer, Warryn Campbell.  When Franklin decided to downsize in February 2007, Champion and Campbell stayed connected.

Campbell produced Champion, alongside his wife Erica who contributed vocals to the uptempo, bouncy track “Always. Co-written with songwriter/producer/artist Eric Dawkins, the song thankfully “is about being encouraged. Reflections also carries three other ageless tracks from that period in Champion’s life including “Find A Reason,” “For Better or For Worse,” a duet with his wife, Paula and “He Is the Way.”  All Champion needed was a simple piano to convey his whole heart and love of Jesus Christ on “He Is the Way.”

As Jason Champion prepares for this next chapter in his life, he is continuing to be faithful and obedient to the God he serves. I want to be known as a transparent person and somebody who went to bat for the underdogs.”  It is here and now, that Jason Champion is comfortable honoring his own reflection.