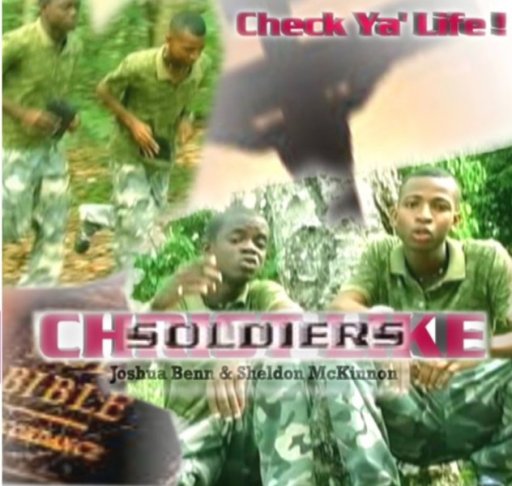 Joshua Benn and Sheldon McKinnon are two young men who share an intense love for music. The duo forms a gospel-singing group known as Christ-like Soldiers. Their aim, they say, “is to spread the message of Christ in various musical genres, whether it is reggae, rap or dancehall.” The group has been in existence for over a year, and originally consisted of four people including two brothers — Daniel and Travis Fraser — who were also the group’s youngest members. The four, who are all members of the Calvary Assembly of God Church in Mc Doom, were initially a dance group, but later decided to focus on singing instead. The main person behind the change was Joshua. According to him, he always had a love for dance and music but it was after he developed a keen interest in the steel pan and singing that he urged his fellow group members to start a singing group. The group started but the Fraser brothers dropped out because of their young ages and the stages of their academic pursuits. One of the brothers was about to sit his National Grade Six Assessment examination and the other had recently started high school. Although the group is yet to release a complete album, it has released a few singles and videos. These include its debut song called “Check Your Life”. The latest single is titled “Christ-like Soldiers Doing their Best”, which according to Joshua and Sheldon, tells their story. They said that as individuals and as a group they are not perfect but are simply: “doing their best”. At present, they are working on producing the video to another one of their singles called “Too Blessed to be Stressed”. Plans are also on stream to do a collaboration with Shawn English and RC titled “Satan Don’t Mess Wid Me”. In spite of the group still being in its formative stages, the two youths have big dreams. The duo wants to take gospel music to a higher level to the point where they are recognized as mainstream performers locally, regionally and even internationally. In the future, they plan to open their own recording studio which they hope will create avenues for other youths. Currently, the group is under the management of Gary Duke. Both group members are extremely appreciative of his efforts and tremendous support. Duke, according to them, works diligently to ensure that the group gets as much exposure as possible. In recent times they have shared the stage with DJ Evangelist at the ‘The Real Christmas Jam’, at last year’s Main Big Lime as well as ‘The Real Easter Jam’, held at the Sea Wall Bandstand on Easter Monday.
Both Joshua and Sheldon have other goals career wise besides becoming successful recording artistes.
Joshua is currently pursuing a degree in Sociology at the University of Guyana. Upon completion of his degree, he intends to commence studies in law, which will set him on course to fulfill his goal of becoming a lawyer. He admits that the combination of law and music is unusual, but he feels that this dream is not impossible once he remains focused and works hard.
Sheldon is currently employed at Habit International Supply and is pursuing studies in accounting. He says that he has a love for both music and accounting and intends to become a “musical accountant” so to speak. Although young and inexperienced, Joshua and Sheldon are clearly determined to be successful. They both emphasize that they are two young men who are “doing their best to exert a positive influence in Guyana.”