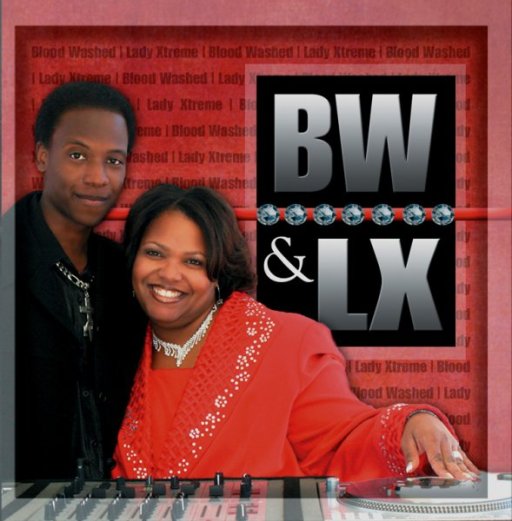 When you think of rap music, even Christian Rap, you may think of sweat shirts, tennis shoes, even jerseys.  But there's a Christian Rap couple that is putting a different face on the genre.  Stephen & Nicole Carter known as BloodWashed and Lady Xtreme form the group BW&LX; a husband and wife Christian Rap Duo that presents an upscale look and a family friendly approach while still delivering a powerfully motivating and inspiring performance.  This couple has a chemistry and professionalism that sets them apart from many.

Though the BW&LX name is new, they are by no means new to the areas of Christian Rap, urban ministry, stage performance/production or studio production.  They have each been operating in various capacities of on and off stage ministry.

Lady Xtreme (LX) is a pioneer in the Christian rap industry; known as one of the first female Christian Rap artists in the Columbus, Ohio area. She's been uplifting Christ through rap since the early 90's.  After being anointed to go forth in ministry by Apostle Lafayette Scales of Rhema Christian Center, she hit the ground running; rapping and speaking at numerous church and community events.  She's also known throughout Ohio as a promoter and networker who strives to make connections between Christian businesses and ministries.  LX brings to the group her skills of impacting rhyme delivery, crowd motivation, encouraging personality, and lovable stage presence.

BloodWashed (BW) founded BloodWashed Productions, Inc. in 1997; providing deejay, sound and lighting services.  He has expanded the vision to include music production, rap ministry, and motivational speaking.  BW has rendered services to a plethora of churches, ministries, national and local artists in the Ohio area and beyond.  He has also served as a deacon, a teacher, a praise & worship leader, youth worker, and in other capacities at various times in his local church.  BW brings to the group his skills of lyrical precision with a biblical foundation, smooth vocal ability, stage versatility, and DJ & studio production savvy.

Together BW&LX make a phenomenal rap ministry team whose message reaches across many age and social barriers.  There unique blend of class and social relevance along with there balance of rap music with a spiritual message make this husband and wife duo a powerful unit that God is sure to use in a mighty way.