The Business of The Kingdom

Sobre The Business of The Kingdom

Servicing the business side of your vision by handling your administrative needs.

The Business of The Kingdom » Blog » Site News » Jason Wright and The Master's Touch Announces the Release of New Single "Show Yourself Again" feat. Crystal Aikin 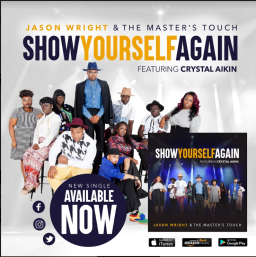 ROCHESTER, NY - Jason Wright and The Master’s Touch is excited to announce the release of their new single “Show Yourself Again” featuring the incomparable voice of Crystal Aikin.  After a four year hiatus, Jason Wright and The Master’s Touch are back on the scene with a powerful worship hit that is sure to shift the atmosphere in any church or arena.
You can now purchase the new single on iTunes, Google Play, and Amazon!
Jason coins the release of “Show Yourself Again” by saying:
“Show Yourself Again” is a powerful song that is sure to change the lives of each listener. It was produced by the musically talented and long-time friend of mine Rufus McGee, Jr.  A special aspect of this single is that it was written by Coye Duncan, a member of The Master’s Touch that I have watched grow musically and spiritually in the great anointing that I always knew that God had on his life.  My spirit was compelled to birth this song because of my strong desire to see miracles back in the church like we used to see in the days of old.  We serve a never-changing God, so if He did it before, surely He is able to do it again!  I am excited for the new single and looking forward to the worldwide impact it is sure to make on each person that hears it.
ABOUT JASON WRIGHT AND THE MASTER’S TOUCH:
Jason Wright is no stranger to Gospel Music and the Gospel Music Industry, as he was a long time member of Stellar Award Winning choir Ricky Dillard & New G. Jason is the co-leader of the hit song “Take Me Back” in which he recorded with Dillard & New G on their 6th album. Jason has also recorded with Dorothy Norwood on her “Shake The Devil Off” album as well as several others. Currently Jason serves as the President/Minister of Music for the Church of God in Christ of Western New York overseeing music for over 90 churches across upstate New York. Jason has traveled the world including Germany, Italy, and England spreading the Gospel through music.
The thing that Jason considers to be one of his greatest accomplishments is being the founder and director of The Master’s Touch in the summer of 2005. The ”Touch” has since shared the stage with several major artists including tours with Pop Star Josh Groban and Country Star Trace Adkins. In 2007 Jason & M.T. were named “Best Choir” by Dr. Dorinda Clark-Cole’s Singer’s & Musician’s Conference, and has since traveled across the country with their message of hope. Jason & M.T. released their Debut project entitled Victorious Believer in May 2011 on the Canadian based Redeeming Music label, which earned them a Rhythm of Gospel Award for their song “Sinner Man” featuring Lillian Lloyd. With the success of the debut album Jason and the choir have been invited to be a part of several major events including Hezekiah Walker’s Choir Fest during Stellar Award Weekend, and made an appearance on BET’s Bobby Jones Gospel Show with Jason’s mentor the legendary RICKY DILLARD.  Songs of Declaration, the sophomore album of Jason Wright and the Master’s Touch, was released in July 2014 on Dream Capitol Christian Records and hit top 40 on the Billboard chart.  The full third album of Jason Wright and The Master’s Touch will be released in late spring/early summer 2018.