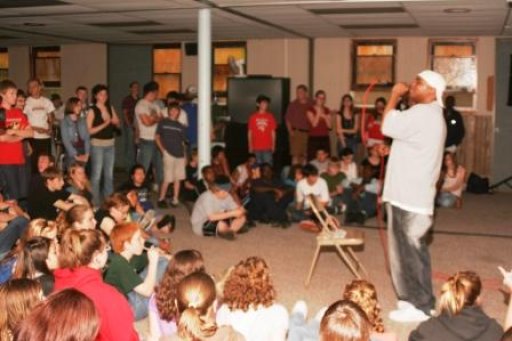 About Amminadab The Messenger

Amminadab the Messenger has been in the rap game since 1979. That's right, he attended Drake University on a football scholarship where he met many of his coleagues from Ny, Philly and Baltimore. Already a fan of the Funkadelic/Parliaments this was a idea fit.Amminadab is noted for bringing rap to Northwest IN. He also is noted for directing and producing the first ever Rapsical "Just A Phase Of Life" in 1995. Ironically, this was 10 years before the movie version of Carmen featuring Mos Def and Beyoune Knowles.
Amminadab's Credits
Performed with the world famous Temptations at the Genesis Center in Gary, IN. Performed in concert with the legendary Marvin Sapp at Sabrina's Ballroom CHi. IL. Perform with Stellar award winner Daryll King at the Harubba house in Chi. IL. Performed at the IN. Black Expo with Spike Lee in attendance Amminadab has alos been in venues with hiphop legends Dougy Fresh and Flava Flav in E. Chi. IN.

Amminadab The Messenger » Audio » Albums » Power of The Tongue/2006