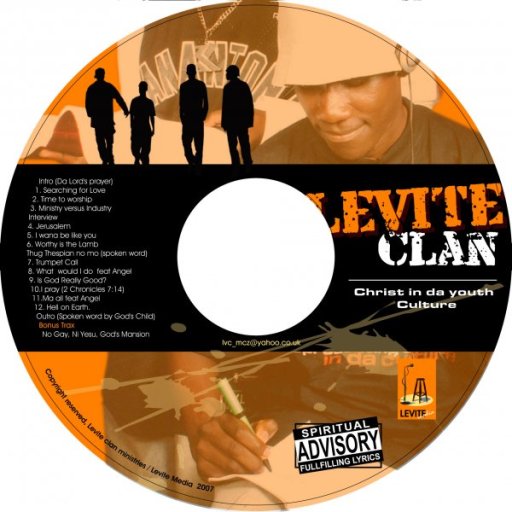 About The Levite Clan

"There is word in church dat' the devil has manufactured two weapons of mass destruction; Hip hop and Rock N Roll. That the former targets to blow black folks to hell, while tha latter targets white folks" Renee MC.

There are places the pastor don't go to and yet Jesus commanded us to take the gospel to the end of the earth. The evangelist may find it easy having open air crusades in a football stadium or an independence park but there are places he just cant simply go to. This is where we step in.

We are the Levite Clan (LVC) and our debut Album-CHRIST IN DA' YOUTH CULTURE-breaks down our vision; Taking da gospel to da streets (Beyond Church boarders).

The Levite Clan is a Gospel Rap/HipHop ministry, comprised of 3 members; Renee MC, No Hell 01, and Jay.

The group was formed in 2004 and on 9th October of the same year, their debut single "NO GAY" was launched at Prime time @ the pool( Makerere University Kampala,Uganda).

The ministry is committed to Urban missions as a way to reach out to urban youth, especially in schools, Universities and other gatherings, including those that are not neccesarilly Gospel oriented.i.e(Clubs, pubs, parties..... etc).

"The streets to us are a representation of those that are outside church buildings especially the youth in HipHop culture and this is where our hearts beat more" No Hell  01,President The Levite Clan.

The Group has just released It's 15 track album-CHRIST IN DA' YOUTH CULTURE-which comprises a mixture of HipHop and RnB flavored beats.BUT the message that is JESUS centered remains the hall mark of the entire album. CHRIST IN DA' YOUTH CULTURE is not just an alternative to secular hip hop,but is an antidote to the junk that is served to our youth every day." Renee MC.

We the LEVITE CLAN wanna be utilized as urban missionaries. We do wat' da' pastor don't do. "We preach sermons behind beats" Jay