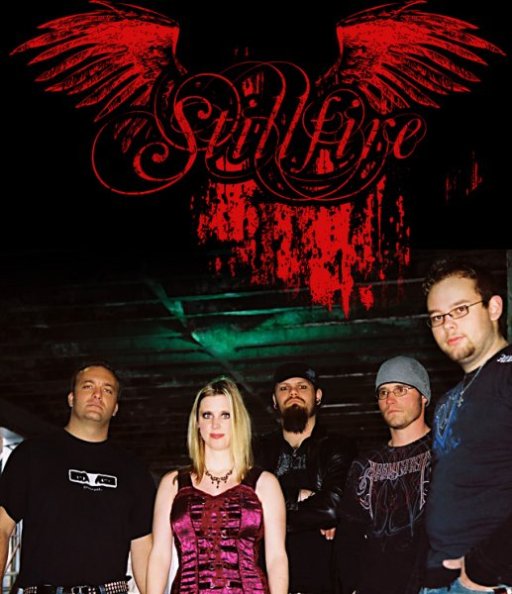 The years have seen the humble beginnings of Stillfire progress from playing small venues and state fairs - to being able to rock hard at various music festivals, bars, and concert venues. As a female-fronted rock band, it's very easy to lump Stillfire in with many of the other bands in the rock genre that boast a woman as their lead singer. Instead of the gloomy, gothic, industrial-influenced approach taken by so many of their counterparts, Stillfire draws more influence from the post-Seattle sound of the mid 1990s. While not limited directly to those influences, Stillfire pays more homage to Nirvana, Soundgarden, and post Black Album-era Metallica than the current wave of goth-rock girl bands, such as Lacuna Coil, Evanescance and Within Temptation.

They also carry with them the modern rock edge that has found bands such as Breaking Benjamin, Disturbed, Staind and Sevendust succesful. Their sound can be most accurately described as "bi-polar," containing two distinct vocal stylings being used. Melody is the key factor in Stillfire's repertoire. The vocals are airy, yet distinctive and carry a strong sense of passion and resolve. The songs range all the way from acoustic interludes and guitar solos to brutal screaming breakdowns and back again. It's this wide range of diversity that gives Stillfire a unique niche within their genre.

There is power in the sound of simplicity as Stillfire demonstrates. Many of the chord structures and patterns found within their music are very easy to follow. It's not hard to anticipate the next chord, but within this simple structure there is an enormous build up of tension that reaches epic proportions as the songs crescendo.

The most unique factor that sets Stillfire apart is their firm devotion to their spiritual groundings which find themselves woven in and out of their songs. Their faith is stark and apparent in how they present themselves individually and how they relate not only to their fans, but also to the other bands they play with. Of all of the things that create a band and make them who they are, the ones of greatest import are the relationships between each other. Through their relationships with each other, they find as the old proverb says that "iron sharpens iron." Stillfire wants their faith to shine through in their relationships with each other and with their fans and not allow religious precepts to limit their availability to those who may find their faith based approach a turn off.

Stillfire is made up of founding members Megan Steele on lead vocals and her husband Jeramy Steele on rhythm and acoustic guitar. The backbeat is provided solidly by Aaron Brown on drums and Gavin Ward on bass. Last in this list of players is the most recent addition to the band, Brandon Biggs on background and screaming vocals, and lead guitar.

Since originally beginning as a hip-hop project using electronic drum beats with a co-lead front man performing rap vocals, Stillfire has undergone many member changes. The rap vocals are a thing of the past. As a result, many of the songs have changed in their stylistic approach but the integrity of the songs still remains. Hope in the midst of darkness, battling and throwing down apathy, loving freely and unconditionally and devoting oneself to be a better human being are many of the themes you will find.

Their 7 song EP titled "The Wounded" was released in late 2007 under the band name Efferent. Since then the band decided to go back to the original name for the ideal that it stood for. To be a still fire is to allow the passion inside of you to speak for itself. To be still and allow the powers that be work through and speak through you. This is what Stillfire strives for as a way of injecting positivity, peace and clarity into a genre generally consumed by hate, lust, and confusion. The band holds a strong conviction that love and compassion is what will change the world and not just voicing your pain through emotions.

Stillfire strives to be a band that presents itself as real and honestly as possible. Let their music speak for itself.