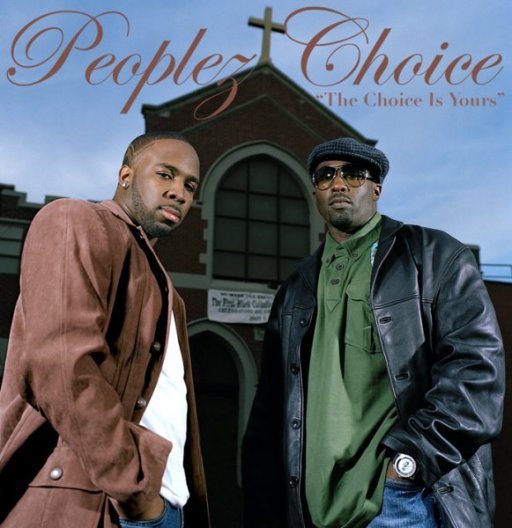 Drums of war sound as the establishment of a new-fashioned cross-genre uplifts the weak, restores the brokenhearted and rescues the lost. The deaf hear and the blind see as People's Choice sets the stage for a new era in hip-hop. Music fans, young and old are devoured by senseless violence, drugs, greed, and sex which shower the music industry with death. It is time for a new message, a new direction, and a new choice - the People's Choice. Peoples Choice stands for empowerment, truth, and the celebration of life. This talented group consists of two extraordinary men who capture the essence of a rough world were the hardships of street life are unbearable. Yet, their thoughtful lyrics expose the flip side of a bitter environment. Those who hear the voices of the exceptional two are rewarded with kisses of guidance. On a wave of enchanting, head bopping beats senses are sizzled as People's Choice bends the rules by challenging people to think for themselves. By captivating the darkest of souls towards good, Peoples Choice engraves the airwaves with the music of the learned. With rich production that blends mid-tempo beats and intoxicating lyrics, PC is the right flavor of the future. The two emcees display their mic skills at ARC, Malikas Palace and the Warehouse. Taskmaster Gooch, confident and creative, startles the senses with his smooth tongue- the track is arouse with truth. Electrically charged 3rd Rail empowers all as he raises the lyrical voltage to break through heartened hearts. These sensational two men plant seeds of wisdom and understanding in the minds of listeners; hope is restored. Peoples Choice is the voice of the future. PEOPLES CHOICE WE BRING FORTH EMPOWERMENT, TRUTH, AND HOPE

MARVIN GAYE,AL GREEN,JAMES BROWN,AND ALL ARTIST THAT STOOD FOR CHANGE