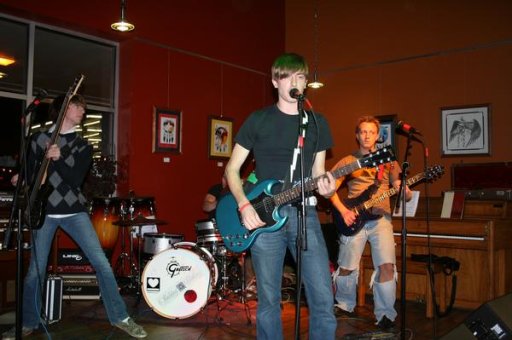 Page 2 is from the Town of Greenville and is led by front man Matt Peters. Forming in 2003 and progressing over time, Page 2 is known locally for their high energy shows and their unique sound. The four member band spent time in the recording studio and released their first album in June of 2008 entitled, From the Cutting Room Floor.

Good friends and band mates, The guys from Page 2 strive to put out meaningful songs by use of lyrical content, and a sound that not only appeals to the ear but also the listeners emotions. Page 2 has an interesting variety in lyrics; ranging from songs about life, love, hope, faith, and much more. In a music industry that is often scarred by negativity whether its sex, drugs, or anything of that nature, Page 2 maintains their family friendly musical content and personal lifestyles.

When asked about their influences, members of the band all have a very different answer leading to a very eclectic collection of tastes in music. When asked what Page 2 sounds like one answer given is If Guns n Roses and MxPx conceived a child, Page 2 would be born. Influences include a good mix between classic rock, alternative rock, and punk.

Based on these influences Page 2 has a very unique and dynamic sound. It isnâ€™t often that a single album encompasses two totally separate styles and fuses them in to a completely new sound; however, Page 2 has successfully accomplished this task. Amongst the members of the band, they often refer to their unique style of music as runk which is nothing more than the combination of rock and punk, but separate from what most people know as Punk Rock.

Along their journey Page 2 has played along with bands such as Silent Point, Punchline, MxPx, and Reel Big Fish and are hoping this list continues to grow to the point where up and coming bands are proud to say theyve played alongside Page 2.