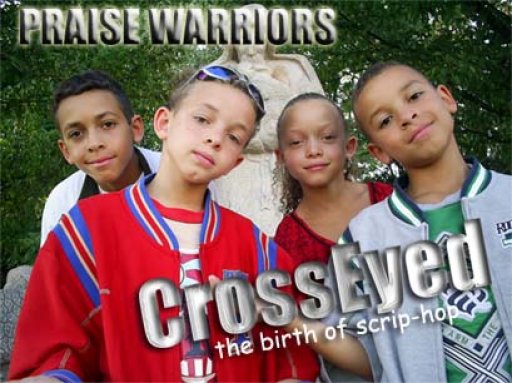 Wesley, Shaw, Julian and Cheyenne won a scripture verse contest at church
and shortly thereafter,
the
Praise Warriors were BORN.
The four recorded all the songs in a little bathroom -turned -recording booth in their Auntâs basement where their cousin had built his studio.
At one point the CD was finished, but the computer crashed and all the songs were lost
and the whole CD had to be re-recorded.
By Godâs grace, they went back to the drawing board (or studio) and completed the CD.
As part owners , the Praise Warriors and their parents opened Oblivion America Recordings, started producing music videos and prepared to go public.
They bring their own brand of Christian music, called scrip-hop, which mixes the word of God with hip-hop tracs to make passionate and energtic praise music that people from
1 year old to 80 years young can enjoy.
Wesley, 14, the rapper of the group , recites Bible verses as if he wrote them himself.
Shaw, 12, sings his verses the majority of the time and enjoys doing so.
Jules, 11, is the hype man; he keeps everything moving right along and
gets the people pumped up and on their feet.
Last, but hardly the least ,Cheyenne, 9, among other things is responsible for
exclaiming chapter and verse of the Bible being used in the song.

All together you have The Praise Warriors!

Their debut album is titled âCrossEyedâ which simply means focused on JESUS.

Their dream is to have people all over the world learning Godâs word while accompanied by their music and come to the saving knowledge of Jesus Christ.
View All