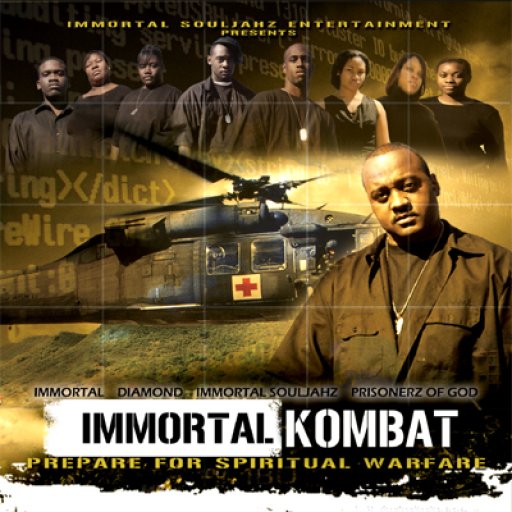 IMMORTAL SOULJAHZ ENTERTAINMENT is a gospel group/label based in Houston Texas, started up by veteran gospel rap artist Immortal. As youth growing up in the same church under the same spiritual influences, this group of soldiers is ready to spread the gospel of Jesus Christ. The groups mission is to reach out to the lost and comfort the saints of God with a message of hope and peace.

Adopting alias names to identify their ambitions in Christ they strive not only to preach the gospel but to also live the life of a Christian soldier. The group has traveled all over the city of Houston as special guests at many churches including trips to Louisiana, Port Arthur, Baytown and Praire View. They have done joint ventures with other gospel artist such as X-Thug and Ghost Riter (formally known as C.I.A) CPR, D.O.P, Real Saints Network artists: Educator, Jewel a.k.a. Fire, Trinity & Christian Man. They have also connected with other artist like H2G, S.O.G., MB a.k.a. Twinka-Sta, AFC, WB-The Coach and M.I.R.

On December 13, 2005 Immortal Souljahz Entertainment released their first CD titled âImmortal Kombatâ a compilation disc which features artists; Immortal, Diamond, Immortal Souljahz( Da Prophet, Souljah Girl, Souljah T) and Prisonerz of God(Gynuwin Souljah, Devyne Souljah, Rychous Souljah and Sacred). The album focuses on Christianity and the realities of our on going conflict with our spiritual adversary the devil, and is designed to encourage, inspire and to prepare you for spiritual warfare to help you to live a victorious life in Jesus Christ. With a mixture of hard/smoothe rap tunes and a harmony of singing melodies this group is known to stir up something on the inside of itâs listeners.