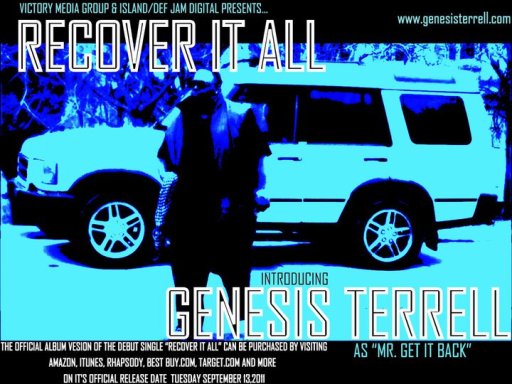 Genesis "Gen Vegas" Terrell' music career began in 1995 at the age of 14 as he recorded with the music and arts conference choir under the direction of Charles and Emma Easton of John P.Kee' V.I.P fame. After m.a.c. Genesis began to record countless sessions with local, regional and national secular & gospel recording acts from the age of 15 to 21, during this period Genesis signed with two independent record labels ( Reel Nice entertainment & Storm entertainment) both companies gave Genesis outlets to record, write, produce and perform on several mixtapes as well as solo efforts by more established acts in addition to working with these labels Genesis acted as a consultant and highly requested feature for Doeboy Records of Columbus, Ohio. Finally in 2003 opportunity knocked and Genesis independently released an R&B project that featured an underground club song titled "Tonite" with a cameo by hip hop veteran Capone, by early 2004 this project created enough buzz for Genesis to travel, sing background and record with several Hip Hop and R&B  veterans such as Case, Devin The Dude and many more, life seemed to be good but the good life was slowly turning into late nights, drinking and other reckless activities.  After growing up in church and hearing the word of God conviction began to fall on Genesis for what the secular life was turning him into and instantly he chose to give it all up and go back to his roots in 2005. Upon returning to God and gospel music Genesis began singing with the praise team at Meredith Temple C.O.G.I.C ( Pastor William Meredith Sr.) also serving as a co-writer to the church welcome song and recording with Bishop Roger Hairston and voices of deliverance on their breakthrough project "Brightside" though he was not receiving the acclaim that secular music was giving but doing the work of the Lord was pure satisfaction.  From 2000 to present day Genesis has performed, written, co-produced, sang background, served as a tour manager or hosted events featuring artist such as Case, Devin the dude, Issac Simpson, Rev. Wendell Lowe, Bishop Roger Hairston, Apostle Ronnie Diamond Hoard, Montrel Darrett, Jason Champion, Terrell Carter, June, The Hebrew Children, Tj & Testimony, Dave Hollister, Mitchell Jones, Christopher, Marcus Cole, Claude Duece,Mike E, Kevin Lemons, David Chance formerly of Ruff Endz, Scars, Lady "G", Karla Archer, Men of God's Heart, Lady Extreme,  Election sure, MGH, Von Woods, Lamarr Scales, Kim Burrell, Keith Reed, Tonex, Chris Byrd and many more. Genesis Terrell is not a household name but once you discover the ministry, talent and heart of this Godly man you will never forget him. Currently Genesis is a worship leader at his local church in Michigan. In addition to being an artist Genesis serves as a producer, manager, promoter, marketing coordinator, sound technician and an all around business man when it comes to music. Genesis is available to serve in any of the forementioned areas as well as an event emcee/host,  performer, music business consultant and a dj for christian or faith based events.