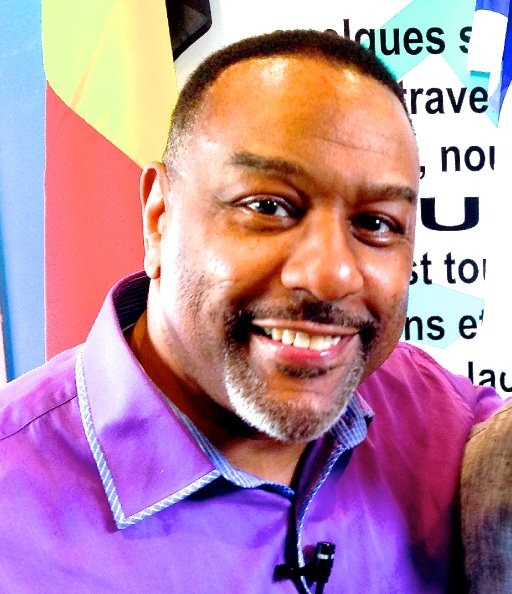 
Chosen to do a Work for the Master” BIO

Anointed by GOD... At age seven Calvin responded and was baptized into the faith with a great love for the Lord Jesus Christ. Bridges sings, writes, preaches, teaches Praise & Worship seminars, and performs Gospel music throughout the world.

After studies including, Southern Theological Seminary, Chicago State University, he was ordained into the Gospel ministry at the Faith Tabernacle Baptist Church, Chicago, Illinois where he served as Associate Minister and Minister of Music, 1979-1999. On August 18, 2000 Bridges was ordained an Elder in the Churches of God In Christ by Bishop William H. Bonner of the Sixth Jurisdiction of Illinois. Currently, he is a member of the Apostolic Faith Church family, Chicago, Bishop Horace E. Smith MD, Pastor, and serves the nations of the earth, spreading the Good News about Jesus.

Bridges recounts, “ My journey began on the West side of Chicago. As a child I attended various denominations of churches with my Mom, sister and aunt. Having a love and talent for music; singing in the choir, listening to records, I went to all the Sunday afternoon “Musicals”. Mom got me a piano at age 7 and I led my first Gospel song at age 10… I Called On The Lord And Got An Answer. After that, I was hooked! I regularly attended concerts of the great choirs of Chicago, the Thompson Community singers, Fellowship Bapt Church, First Church of Deliverance; Mt Sinai Baptist Church where James Cleveland was Minister of Music; and most memorably, was Pilgrim Baptist Church where Thomas Dorsey, (Father of Gospel Music), was the minister of music. I received my first position as church musician at age 9, (I only knew one Chord in three positions), …but they hired me anyway… Little did I know at that time how much I would grow to love Jesus, Gospel music and be a devotee decades later!”

“After serving as Minister of Music for many years at Chicagoland churches, I became a studio musician and started performing as vocalist with bands in R&B and Jazz clubs locally. Soon after I worked with R&B icons Curtis Mayfield (keyboards), Leroy Hutson (wrote I’m In The Mood For Love, (Under pseudonym, James Mendell), Linda Clifford (keyboards and wrote her disco hit, Sweet Melodies), Tyrone Davis (keyboards on In The Mood & How Sweet It Is To Be Loved By You). I've recorded with acclaimed producers Gil Askey, Tom Tom 2000; Bobby Martin... recording at Chicago’s famed Universal Studios, Chess Records, Curtom Studios, Sigma Sound, Philadelphia and singing on TV & Radio commercials.”

“Before ever traveling to New York or California, I was booked to tour the USO circuit in Germany and France in the 1970’s. I had no idea at the time, international music performance was the path that my life would follow. As organist and MD for soul icon, Jerry Butler, The Iceman… I met vocalist Dee Dee Sharp (Mashed Potato Time), then wife of the legendary Kenny Gamble and became a producer/staff writer at Gamble Huff & Bell (The Sound of Philadelphia.”

During that time, God awakened in me an interest in the Bible. I heard the preacher say one Sunday morning, “When we pray, we talk to God… But when we read the Bible, God speaks to us”… I'd never heard it put that way before, and I was curious to hear what God had to say to me… I read the Bible on breaks during concerts opening for such acts as, Don Rickles, Ike & Tina Turner, Richard Pryor, Bill Cosby, B.B. King and even at Playboy Clubs.

The more I read, the more I wanted to read… God began to open wisdom to me in Proverbs and Ecclesiastes… He wooed me with the passion and poetry of the Psalms… And nourished me with the Gospels and New Testament writings. So began my quest to really know God, not just know about Him. It was at this time I walked away from the position at Gamble-Huff & Bell, (The Sound of Philadelphia), and I told God, “Lord the greatest gift you've given me is my voice. I want to use it to sing praises to you and about you to the world.” Always seeking, ever learning, God has blessed me to touch many lives and cultures with music and the Gospel!”

I achieved success singing, writing and recording Gospel music. I’ve written popular Gospel songs for Rev Clay Evans’ Fellowship Bapt Church, Thompson Community Singers, Albertina Walker’s “I Can Go To God In Prayer” and “Spread The Word”, Thompson Community Singers, Jessy Dixon, The Faith Tabernacle Voices and my own recording of the very popular, “Chosen”. I'm the recipient of two of Gospel music’s most coveted Stellar Awards. Television appearances include a Grammy nomination and performance at the 26th Grammy Telecast with Albertina Walker. Most thrilling was a call from Oprah Winfrey telling me that she had to have me sing “So Much To be Grateful for on her show. But even after writing and recording award winning music, touring and accolades, the concerts, shows left me unfulfilled. Then learned the difference between doing “shows” and “ministry”. It was then I began to desperately seek God to increase my anointing and reveal His will for continued international music ministry.”

After going on tour with Jessy Dixon to Scandinavia and the Netherlands, I saw how ripe and hungry Europe was for Gospel music! A year later, a partner and I traveled to Stockholm on a “Paul & Silas” missionary journey, not knowing anyone, to make connections and network. God gave great favor and I soon met Åsa Wanström Keiski, director of Immanuel Gospel Choir, Stockholm, and at a youth choir festival in Norway, I met Tore Åas, leader of Europe’s most popular Oslo Gospel Choir. We all began a relationship/fellowship that has lasted going on 20 years. In addition to concert and TV appearances with OGC, Tore and I have been clinicians together at choir workshops and festivals in Europe. Together we've penned popular Gospel songs, Celebrate, Glory To God Almighty, most beloved, In Your Arms and also with Andre Crouch, Reaching Heaven.”

With a passion for the Gospel and compassion for people of all cultures and walks of life, God has graced me to minister in 17 countries including church crusades, festivals, concerts and choir workshops in Caribbean, Canada, Ghana, Kenya, Germany, England, France, Israel, Italy, Norway, Sweden, Denmark, Switzerland, Belgium, Mexico and the USA.”

Calvin Bridges is founder of Chicago Praise Ministries, a non-profit Gospel music arts organization. His vision, with the Gospel music art form, is to spread the awareness of the Gospel's diversity and inclusion through music throughout the world. He endeavors to promote and provide educational training to all peoples in the Word of God.

CPM is also active through volunteering for Education Reform, Parent Advocacy, and the Stop The Violence movement.

Bridges says, “There are so many hurting and lost souls in the world… You don’t have to stay in the shape that you’re in. After you’ve tried the rest, now, try the best!” “SOMEBODY HELP ME LIFT JESUS”! Calvin Bridges is Chosen to do a work for the Master! 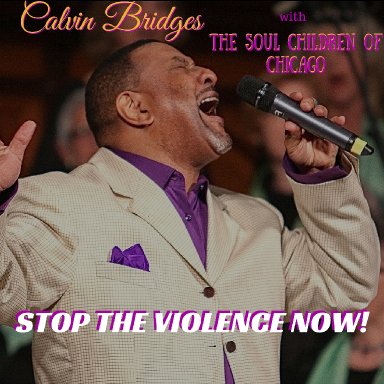